I saw my 42nd doctor today. I always start my introduction off the same way for everyone: “So, are you up for a challenge?” I get the same reaction every time, like there is no way I have something they haven’t seen yet. I feel their need to pat me on the head and tell me I’m being cute, and they’re waiting to smirk and say, “Oh, it’s just a migraine, sweetie.” But then they start to sputter, or stutter, or ask me the same question six or seven times. Then they leave the room. Then they come back in (as if they haven’t just gone into their office and said “Fuck” a few times, noiselessly, before putting on their game face and walking purposefully back into the exam room). This doctor was no different.

He said, “I just don’t know what you have. I have never seen this before, but you know, I’m just a neurologist. I wouldn’t know what to do with you.” I said, “Study me.” He said, “I wouldn’t know what to study.” I said, “But these are neurological issues. Someone has to be willing to think outside of the box, like keeping me upright for scans instead of laying down.” He said, “But I don’t know how to help you. I think you should go back to the neurosurgeons.” I said, “Okay, can you talk the neurosurgeons at the U of M into taking my case?” (He is, after all, a University of Minnesota neurologist.)

He said, “I’ll just send them a referral like normal.” But this isn’t normal. None of this is normal. I wish that I could make my surprised face now (even if it’s an act), but, you know, my face is half paralyzed. I really had to fight the urge to have my medical transport person make a pit stop at a bakery so I can buy a chocolate cake to put my whole face into in the privacy of my apartment. I’m past crying about it. It’s just exhausting. How am I supposed to carry on without even a small glimmer of hope? The doctors tell me not to give up. That means “fight,” right? But they don’t want me to fight with them, just the ever-elusive “someone else.” I often wonder what they would do if they were me.

Today wasn’t a total loss, though. My sister and I went to see a dermatologist at the same time early in the morning and then made a pit stop at her place to pick up her two dogs before she went to work, and as usual, the smaller female managed to get loose and run free. She’s some sort of terrier mix with short, wiry hair and sweet brown eyes that my sister and her husband got the day I moved to Minnesota. The male is some crazy mix of beagle and who knows what else- maybe Saint Bernard? – he’s got kind of a big body but pretty short, stubby legs, and the saddest face ever. The male also does not move fast for anything. When he sees me, he knows I’m going to rub his belly, so he doesn’t even bother coming over to me first. He just throws himself on the floor and raises his front paws, like it would be way too much effort to walk a few steps, and I definitely should not miss out on scratching his armpits. So while my sister was trying to lure the female back with treats and we saw her bounding through some brush like a jackrabbit, the male saw me from about 50 feet away and launched himself towards me near the parking area. I swear to you I have never seen him move like that with his ears flapping in the wind before, and I probably never will again. The female heard me calling for her and she buzzed right past my sister and threw herself down for a belly rub too. I really wish I could have pets. I’m lucky my sister works across the street and I can go get some fur therapy when I have a crappy day. They were both rescue dogs, so it warms my heart that they love me enough to come to me too.

Today my sister drove my car so that I could clean it out a bit before listing it for sale. Let’s be clear, here: I don’t want to. I love my car. I did a lot of research before I bought it, and it has all of the features I wanted and nothing I didn’t. I had planned on keeping it for at least a dozen years and so made sure it had the best possible engine for its price point. I got a platinum extended warranty. It fits in every parking space. It’s a hatchback, so even though it’s in the car category, it sits up higher like a small pickup – that means it’s super easy to get in and out of. I could go on and on. Cross your fingers for me for a quick and successful sale, because girlfriend’s gotta live off that money for the next twelve months, know what I’m sayin’?. 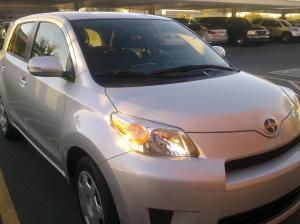