One of my fellow rare disease/chronic illness warriors/sufferers posted a thread on Twitter tonight. She’s quite well known because her condition is very unusual and obvious, but she doesn’t shy away from the camera or public speaking engagements. Her post tonight detailed an eye doctor visit that was made all the more difficult because 1) The eye doctor googled her condition rather than talking to her directly about it – and she is a much more knowledgeable source than Google; 2) The eye doctor left the light shining in her retina while he took a personal call, after finding out that she is extremely light sensitive because of her condition.

Her post had to do with the appalling way that she was treated. As each of us who have chronic and rare diseases either have done or would like to do, she had some choice words for the doctors following her as pointers on how NOT to treat rare disease patients. At no point did she ever say, “Gosh, I have no idea what to do. I don’t know who to talk to about this or how to go through the proper channels [in Australia] to file a complaint.” There wouldn’t be any reason for her to do that. She’s lived with this condition all of her life and she is actually a very vocal and active advocate.

But of course, there’s some asshole who decided to announce that she should file a complaint.

No. Shit. Since the original poster wrapped up the thread by saying that she confronted the doctor and quite forcefully said that the rare disease patient is the best source, and a light sensitive patient shouldn’t be left in front of the light scope while a personal call is taken, and she would be following up with the office, and she just looked forward to trying to relax after being in a lot of pain, I responded. I said, “It’s okay – she knows how to handle bad appointments. She’s had this condition her whole life. She’s an advocate and speaks out often.” In other words, go fuck yourself.

Also recently, a young woman ended up in respiratory failure and was in a medically induced coma and on a respirator. She lost days of her life. When I say young, I mean young. Her significant other has been updating us and has been an absolute rock, but they are both scared and worried and facing big changes. Wouldn’t you know it, in the middle of the updates, I see something about, “Can you guys not offer advice, please?” She’s also a rare disease patient with some of the same stuff I have, but some is different, and I know some asshole is telling her that she needs to do yoga or chew on bark and vitamins from the Himalayas or something. So to whomever is sending her unsolicited advice, fuck you too.

Why does this get me so worked up? I was always a sick kid who grew up to be a sick adult. I became really sick in 2010 and it has been a mystery that has been mine alone to solve; no one has traveled with me to see 65 doctors, or see me through all 10 surgeries. There have been a few people who have helped to fill in some gaps, but they have been sparse. I know what I’m doing. I am educating doctors and nurses and physical therapists as I go along. I teach people how to maneuver through insurance. I help people search for doctors – even when there’s a few thousand miles between us.

The next person who says, “Oh, it must be the acidity” after I tell them I can’t eat pineapple because I’m allergic to it, I’m going to throat punch them. Fuck them too. And fuck anyone who gives me unsolicited advice. I’m so over it and you have been warned. This video is much nicer about it, of course.

Do you suffer from heartburn or GERD? I have, for years. I’ve gone through a number of tests to find the cause of it and also to make sure that the valve between my stomach and esophagus isn’t degrading from the acid backing up (it isn’t). It is the absolute worst feeling to wake up because acid comes up all the way from my stomach into my mouth at night. I’ve also tried a combination of medications, but sometimes they don’t do the trick, and it’s not always safe to be on them long-term. Now I know my acid reflux is likely caused by my mast cell activation syndrome.

So I saw an ad for this pillow system and decided to give it a try. It was especially appealing to me because I had surgeries done on the right side of my body for three years and had to lay on my left, and had torn up my left shoulder terribly – I’m still doing physical therapy, getting injections and dealing with regular pain continuously now. The base inclined pillow looked like it would help me a lot because it actually has space tunneled out for the shoulder and arm:

What you see propped on top of the wedge is the body pillow that is also available with the system. You can buy the wedge by itself, but honestly, I don’t recommend it; I’ve tried to sleep without it, and it’s not at all comfortable to me. Here’s a pic that shows more of the body pillow, which is filled with memory foam bits: 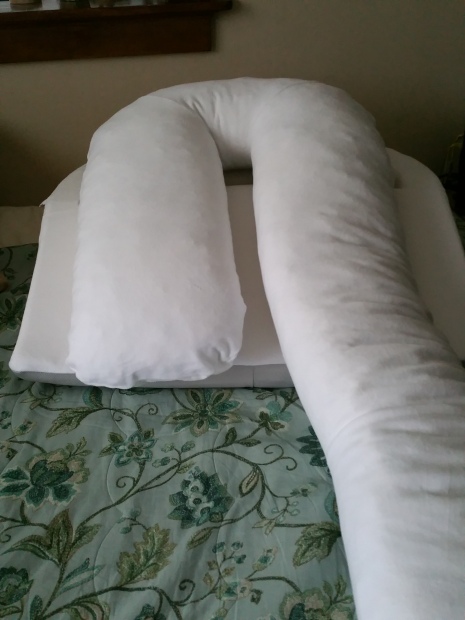 Both pillows have covers that can be unzipped and washed, which I do often.

To sleep, I first tunnel my arm through the wedge, and then I wrap my body around the body pillow for support. MedCline recommends that it’s best to sleep on your left if you are able because of the shape and functionality of the stomach, but it’s okay if you aren’t.

MedCline recommends that you buy your pillow according to your height and weight. If you meet one requirement but not the other, I would say go with the height and not the weight, because where the wedge inclines makes more of a difference for you than anything else.

The pillow system is shipped for free and they have a 60-day money back guarantee. MedCline wants you to give the pillow system a try because they know it will take some getting used to, but they believe their product is worth the time and effort. I believe it too. I showed my pictures to my gastroenterologist because he had never seen or heard of it before, and he knows countless patients who sleep in recliners or who purchase traditional wedge pillows or try to sleep on stacks of whatever will keep them propped up at night.