Today I had another dental appointment, my second for the week. I had thought this would be the “easy” appointment because we were just fixing a broken filling in the back right bottom tooth, part of the whole series of fixes that are a part of the issues that are being caused by me clamping my jaw in my sleep and cracking and breaking all of my teeth because I’m in so much pain.

I should have known that the first bad sign would be the pedestrian who walked out in the middle of the road without warning. My cab driver slammed on the breaks and left us both gasping, and then swearing at him; he just strolled slowly as if he didn’t care that he had just tried to compete with a couple of tons of metal and his human body sure would have lost if my driver would have been any closer whilst trying to slam on the brakes. Maybe he was tired of his life and thought today was a good day to die. Maybe he figured he was just a short ride from five different hospitals and it would be a couple of free nights of room and board with painkillers as the cherry on top. Whatever his reasoning for being a jackass, I was ready to open my door and beat him with my cane. Fortunately for him I was running on 80% blindness, a torn left shoulder cuff and an appointment to keep. 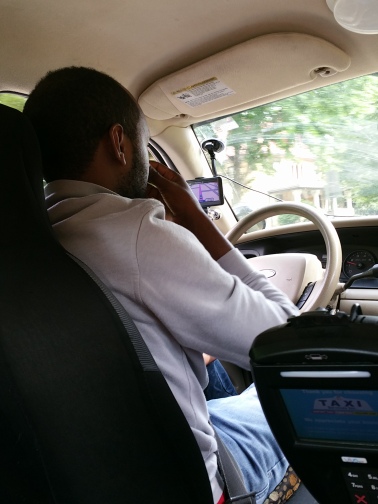 I was called back for the appointment and the assistant introduced herself as Brittany. After she got me set up with the bib and the ugly-ass biker sunglasses (because that’s all the rage now, for dentists to put safety sunglasses on their patients while they drill and shine bright lights in our faces – but really I think it’s so they can’t see us crying), the assistant dentist came in to start me on the Novocaine shots. She informed me her name was Brittany too, so I was officially being worked on by two Brittanys. Yea for something easy to remember in case I had to yell!

The assistant dentist put the swab of numbing gel in my mouth and I thanked her, telling her that the main dentist didn’t do that at all on that side for me on Tuesday. I said I believed that he was trained in a war zone. Both of the Brittanys got really quiet and looked at each other over my biker glasses, and then the assistant dentist tried to make a weak joke, like “Oh, you know, going to dental school is kinda like training in a war zone, ha ha!” and I said, “But I’m right, aren’t I?” and they said, “Yes, you’re right.” Okay, score one for me and my ESP. Sometimes I don’t always like to know everything, but lately the universe has been finding ways to make sure I know. None of this blissfully unaware shit.

Assistant dentist Brittany started doing the shots. As usual, my heart rate started jumping up. I felt like there wasn’t a lot of numbing going on though. So she went for another round, this time going on the inside of my teeth along the gums. The Brittanys went away for a while so the numbing could kick in, and I did a few exercises with my mouth to encourage the Novocaine to spread, like silently mouthing “Unique New York.” I could feel my right jowl going numb, buy my tongue and inner gum line were still feeling normal.

When the Brittanys came back in, they decided to start drilling. I warned them that I still had feeling, but they guessed that I was just feeling pressure or temperature. Now, kids, I know the difference between pressure and nerve pain – I’ve been through 9 lumbar punctures and they’ve hit my nerve bundles with needles every time, it’s really freaking unpleasant, and it can’t be compared to feeling a little cold. So after the third time I said “Ow!” from them hitting a nerve, they finally relented and assistant dentist Brittany did a third round of Novocaine. She told me I should feel the difference immediately. I told her that I didn’t. She sighed, went in for round #4, all along my gums on the right side and hit the juncture between my upper and lower jaw, and gave it a few more minutes to kick in. Finally it wasn’t completely numb but it was just enough numb that we could drill for about four minutes and get the rest of it taken care of.

Generally speaking, most dentists and assistants can handle two instruments apiece. Assistant Brittany was struggling with two straws and a mirror and I was nearly drowning, so I offered to do what I did before – I held one of the straws and kept my hand out of their way while they did the rest. They thought it was great.

The most difficult part was the filling. They were trying to keep the very back tooth dry while they put in a white resin filling (because I’m allergic to mercury fillings so it had to be the resin), and they were doing all kinds of things like moving my tongue and putting cotton wads in my mouth and triggering my gag reflex. They actually got me so badly that I thought twice I was going to throw up all over myself, and at one point I had grabbed their hands because I was ready to move them out of the way in case that happened. I had tears streaming down my face again. My stomach heaved. The Brittanys cooed above me, “I know, I know, it’s terrible, we’re trying not to make you gag, but it’s in the toughest part of your mouth to get to, try to think happy thoughts, wiggle your toes, oh good, you already are, just about three more minutes now, try not to throw up, we’re nearly done, you’re doing great, you’re doing really great, it’s almost time, that cotton is awful, what do you have for plans this weekend?” It was absolutely ridiculous. I checked my makeup afterwards; I expected to have trails of black eyeliner down to my chin, but I had forgotten that I had sealed it this morning in anticipation of the shit show and it had survived quite nicely. (Side note: I strongly recommend eyeliner sealant available from Meow Cosmetics – it’s the consistency of water and you put it on sparingly and must let it dry, but man, it is GREAT for keeping your makeup on longer!)

This is how I think I can help, as a patient: Have me sit upright for the first part of it so I can help position everything like wads of cotton; if I know where it’s supposed to go in my mouth, I can probably make it happen without making myself vomit and without having to fight gravity so hard. I know that they were trying to get everything done as quickly as possible, but just like I helped with the straw, I can also help with stuffing cotton in my mouth and not barfing. If I can handle my Ren & Stimpy nubs for teeth to eat with for weeks, then surely I can handle that.

Just as the Brittanys predicted, as we’re rounding up to dinner time, I’m starting to get some feeling back in my mouth.