1912 was an awfully long time ago. World War I didn’t even start until two years after that. Not everyone had a car, or electricity, or running water. The stock market crashed in 1929. The dust bowl and the great depression happened after that, and World War II.

But I’m getting way ahead of myself, so let me go back to 1912, because that’s the year that my Grandpa Ed was born. And now, maybe in a matter of hours and maybe in a few days, at the age of 105, we are going to say goodbye to him.

Imagine what it would have been like to see what he has seen. He grew up in a tiny rural town in a large family and didn’t speak English until around age 12. His family came from the area that is now known as Slovenia; then it would have been either Yugoslavia or Hungary, depending on whatever local wars had been fought and won or lost.

When he was 17, the stock market crashed, and it was the beginning of the great depression. It was also the beginning of prohibition. He knew who was running booze out of the church basement, but he never got in on it. He just kept his head down and his mouth shut. The county where he lived all of his life is actually the moonshine capital of the U.S. and still has active backyard stills to this day, now that making your own hooch is back in vogue.

Grandpa really wanted to be a baseball player.

Eventually he married my Grandma. We didn’t hear much about their courtship. They were far from the romantic types. They were married for 62 years when Grandma passed away, and by that time, they knew each other very well. Grandpa would sometimes turn off his hearing aids if he didn’t want to listen to Grandma – he’d call them his “ears.” After Grandma was gone at nearly age 92, most of the eight kids were sorting through old papers in the basement and they happened upon the most romantic note from Grandma to Grandpa from before they were married. It said something to the effect of, “I’ll be playing the organ at church next Sunday, I hope to see you. Sorry I was so crabby the other day.”

With 8 kids to raise and a farm to run, Grandpa had to just be content with listening to ball games or reading about them in the paper instead of chasing his dreams. He really hated farming sometimes. He knew how to fix things out of necessity, but on many occasions he could be heard swearing and cussing up a storm at the tractors. One time he walked in on my mom and her three sisters while they were cooking and baking in the kitchen, imitating his ranting and raving. He didn’t think it was so funny.

Like with a lot of things, he had to do certain tasks simply because no one else would or wanted to. They raised chickens, pigs and cows. When I was very little, Grandma became attached to an orange-colored chicken who was quite social whom she named Henrietta, and that girl followed Grandma everywhere. Henrietta couldn’t be spared at butchering time. Grandma couldn’t do it, so Grandpa had to, and Grandma cried and cried.

Grandpa gave up driving around the age of 91. Since he lived way out in the country he could wait that long, but even then it was getting to be a stretch. But he still would take out this old Volkswagen Rabbit for a spin in the fields once in a while if he felt like it. After our Grandma died, one of our aunts lived with him for a few years and took over driving duties; following that, responsibilities were split between the siblings until at age 101 it was decided that he had to leave home and live in a facility.

After Grandpa got settled in the nursing home, he got on with playing blackjack.

This is a picture of Grandpa from yesterday along with my stepdad. The headphones are super amplifiers. 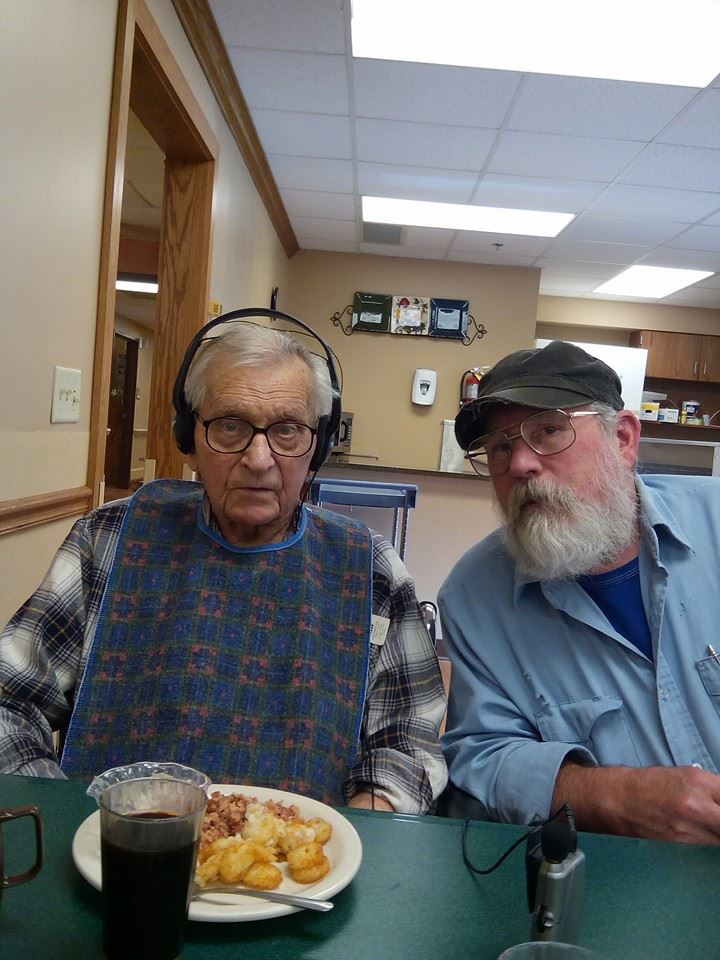 2 thoughts on “Who Wants To Live Forever?”